(Unfotuntey there will be no English translation available for this movie! It will be  in brazilian portuguese with a polish reader)

Maria Ramos sets up her camera inside a criminal court in Rio de Janeiro to follow the daily routine of the people who meet there every day. 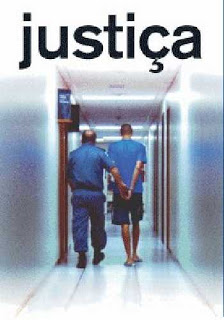 We also get to see a judge, a public defender and an accused, in their lives outside the courtroom, and this simple act – of juxtaposing the court with the outside world – perfectly illustrates the significance of a broader social context in which justice is carried out. This also raises the fundamental question of whom and what, in effect, does the justice system serve. Especially in cases like those judged in front of our very eyes: accessory to theft, possession of drugs and weapons, and other relatively minor offences.
The film’s straightforward observational approach, lacking any voice-over narration, gradually succeeds in revealing a broader social picture, one involving clear implications of police corruption, an oppressive judicial system that basically seems designed to punish the poor for petty crimes, and a penal system characterized by horrifically inhumane conditions. In a very compelling way, JUSTICE reveals the legal system as a sort of public theater dramatizing the social relations and power structures of Brazilian society at large.